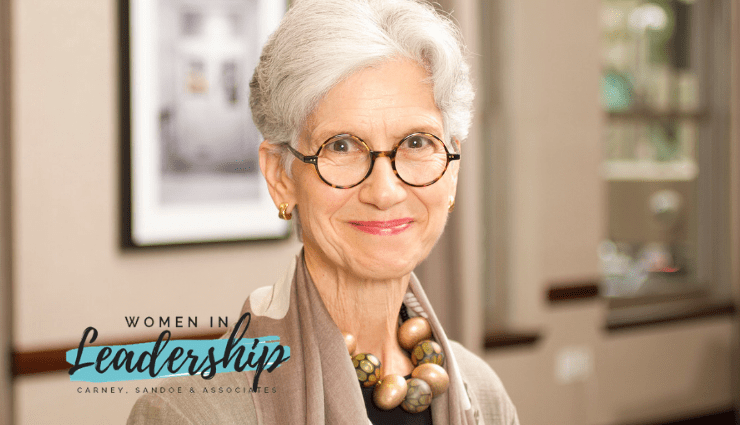 If we are to see more young women move into the ranks of heads in our schools, we might urge them to listen to their impatience. It was certainly impatience, or something like it, that first ignited my ambition to become a school head. There were too many things happening to students and their teachers that needed to change, and I thought I would be better able to make those changes as a school head. Sometimes looking back after all these years, I realize just how young and full of hubris I was.

But I have never regretted the move from teacher to school head. And I know that women aren’t supposed to credit luck for their success, but I was truly lucky in the quality of the schools where I landed and in the mentors I found. I had just turned 35 when I became a school head in 1980. My path to headship had been anything but typical. It was neither straight nor steady, but featured fits and starts caused by my husband’s career moves, taking time off to have and care for children, and the uncertainty of child care. But that path was not nearly so long as the one I traveled after I became a head: 13 years from the time I had started teaching straight out of college to my first headship; 32 years after that as a head at two different and totally wonderful schools. Please don’t do the math!

That my path to headship took place so long ago makes me hesitant to offer advice about what may have helped me in my quest. But, for whatever it’s worth, here are a few thoughts:

From the time I decided I wanted to become a head, I read everything I could on leadership in general and independent school leadership in particular. I attended conferences and networked with leaders, especially women. I did my best to fill in blanks in my resume. For example, I wanted to become head of a K-12 school. Though I had had teaching experience in lower and middle schools, I had never taught upper school students, so I asked my head to give me that opportunity. I loved it, just as much as the other teaching I had done, and I think it helped my candidacy down the line. I kept watching leaders near and far and getting ideas about how they did their jobs—sometimes well and sometimes not so well, and I learned from that.

To find and use mentors is one of the most important things one can do to prepare to become a school head. For me, men served as my principal mentors as there were few women heads and none easily accessible to me. (I do remember watching female heads like Aggie Underwood and Edes Gilbert give speeches and admiring them from afar.) The heads of the schools where I taught were male. One of them, Hugh Madden, the head at The Wheeler School (RI) where I taught and then served as Director of Admission, helped me enormously. My office was just down the hall from his and sometimes after a long and difficult day, he would stop by on his way home to chat. He reflected on his joys and frustrations and took me into his confidence—sometimes we would problem solve together, and that gave me a vivid picture of what it would be like to be a head. He invited me to join committees that would give me experiences that I’d need as a school head. He invited me to meetings outside my area of expertise.

I vividly remember my first development committee meeting. I was shocked at the frank discussion of prospects and their ability to give. I found it embarrassing and coarse to talk so frankly and freely about money. “That’s the way this works,” he said. “Just remember that these people are being invited to give to things that are important to our students and faculty. And giving brings them joy.” He gave me the chance to plan conferences and programs at the school, to develop a new scholarship program, and to work with a public relations firm on our “brand”—though I’m not sure we used that term in the late 70s. I am sure some of these opportunities were a result of the financial troubles independent schools were experiencing at the time (remember “stagflation?”). We were thin administratively, and so it seemed that anytime I offered to do any of these things, Hugh said yes.

Most important, he believed in me. He told me he thought I was “ready” in spite of the fact that I was young and the path from Director of Admission to school head was not a typical one. (It still isn’t, though in my view it can and should be.) When we discussed my options, he said (and I accepted this without questioning at the time, though I wouldn’t today!) that I should apply only to girls’ schools because I would never be hired at a coeducational one, and certainly not a boys’ school. It turned out to be a blessing, because otherwise I would never have experienced the wonder and impact of girls’ schools either for myself or our two daughters. My headmaster recommended me to two girls’ schools. I became a finalist in the first search and got the job in the second one, The Bryn Mawr School in Baltimore, all in the first year I started to search.

At a trustee cocktail reception during the finalist visit at Bryn Mawr, one trustee (who was to become a life-long friend) said, “Well, Barbara, this (your appointment) would certainly be a leap of faith.” And I could not but agree with him. “You’re right,” I responded, “and I can only hope that it would be a leap worth taking for the school.”

For me, there is no doubt that it was, and I invite more women to take the leap. Our schools need you!

I am so proud of this humble and strong lady.
Certainly she taught from what she understood: Hard work, Compassion, a Passion for Excellence.
We in her home town of Leola, Pennsylvania are quite proud of Barbara.